Underground-Mining: the all-new
mining loader models from Conrad and Joal

Usually underground mining loaders cannot be seen on standard construction sites. These machines are more comparable to a „root vole“ since they are working underneath the earth, for example to build a tunnel. It is a fact that such a loader therefore is really interesting and the model market offers a couple of them. Today I will present and compare two new models: Conrad’s Sandvik LH621 and Joal’s Atlas Copco ST14. The Sandvik model was first shown on the Minexpo show in Las Vegas in September 2008 while the Atlas Copco loader was a novelty on this year’s Toy Fair.

Very interesting is the fact that Joal now also produces models in China. On the model’s box we can find the claim "Made in China" and some other facts proof this also. Some model manufacturers use wires for fixing the replica to the inner box and so is also the Joal Atlas Copco ST14 model fixed into the box. I really don’t like this system; there are lots of other and better possibilities.

Let’s start with the Sandvik loader. The real machine has a weight of 57 t and an engine output of 475 HP. This high weight we can recognize also on the model since Conrad typically uses very massive castings – which is great. Typically these kind of machines are very flat and therefore can manoeuvre excellent in narrow tunnels. The LH 621 has a height of 6 cm and the ST14 5 cm. 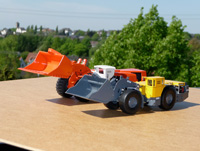 The real LH621 comes equipped with a 10 cbm bucket and features 5 cm tipping height. This is enough to load for example my 40 t ADT model. Joal’s ST14 has the same tipping height and therefore is also able to load an ADT, as for example the Terex TA 40 from NZG. In reality the ST14 is a little lighter and has a weight of 38 t. It’s bucket has a capacity of 6,4 cbm. 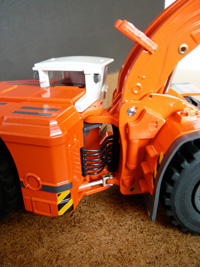 All hydraulic cylinders on the LH621 are the standard plastic cylinders, but also massive. These are integrated within the loader attachment and therefore well protected. Whenever in reality some objects would fall onto the attachment, the cylinders cannot be damaged.

Cylinders on the ST14 are arranged a little more open and accessible compared to the LH621. Here I really like solution Joal provided to protect the bucket cylinder. A protection plate is fixed to the bolt on the piston side; in reality therefore falling objects cannot damage the cylinder.

Some other differences on both models we can find on the bolt connections. Conrad uses the typical and standard brass bolts, which are much more stable. Even after moving the boom a lot, those bolts are sitting stable in all bearings. Additionally I like the bolts more from a visual point of view – but this is only my personal opinion.

Because of the new Chinese production Joal uses small bolts made of white metal, which are a little softer and typical for Chinese model manufacturers. Therefore those attachment connections are not as tight as on the LH621 but have some play in its connections. 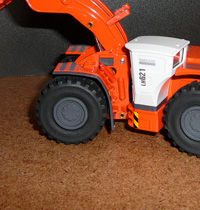 If we take a look into both cabs we can easily see that these are made very flat and stable. Access is given from the front of the cab via small steps, which are integrated into the models’ frames. All front, side and back windows are relatively small. Because the original machine is working under rough conditions in abrasive material, operators would be best protected of falling objects and other dangers. Both cabs have no big differences; the cabs themselves, interior and windows are copied very well on the LH621 and ST14 models. 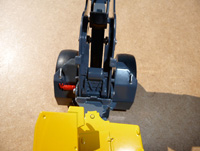 While the Sandvik LH621 is travelling on massive but relatively soft tires with authentic tire pattern, all ST14 tires are quite tough and without this pattern. On both models special and stable mudguards surround the tires. On the LH 621 an additional protection made of grey plastic exists. This would provide also a nice difference from a design and colour perspective.

On the mudguards of both underground loaders small fire extinguishers are assembled; really a nice detail in my opinion. Additionally the LH621 back axle is made oscillating to provide excellent travel characteristics. This detail isn’t realized on the ST14 model. But from my point of view this is not a disadvantage.

Easy travelling is provided by the articulation; both models can easily manoeuvre. Only the steering angle on the ST14 was a little smaller on my review sample. Steering is done by hydraulic cylinders, which are well copied on both models. Conrad provides here another detail and copied also the hose package running from the loaders back to the front part. In reality these hoses would provide hydraulic oil to all loader and travel users; the ST14 doesn’t have these hoses.

On both rear ends the engine compartment would be located. A great engine copy can be seen on the LH 621 model; Conrad assembled a small turbo charger, air filter and oil delivery parts – all made of plastic, with an authentic look. The engine cooler we can access from the back; I easily can open a small door and we can have a look on the cooler.

On the ST14 we cannot see an engine copy, because the engine here is completely located within the compartment; also in reality. But in contrast to this you would see small silver handrails on the model, which looks also great. Air filter, fire extinguisher and hoses are integrated into the casting and only shown by a different colour. For example the extinguisher is printed with red colour, the handrail in silver colour. The engine cooler is also only indicated and doesn’t feature a door, which can be opened.

All in all I can state that both underground loader models are highly detailed, both Conrad and Joal did a great job. In my opinion Joal’s Atlas Copco ST 14 is a good start into the world of models, while Conrad’s Sandvik LH621 is an excellent model for those collectors who enjoy massive and stable models.

It will really be interesting to see the development of Joal models in general within the near future. Since it seems that they have started also a Chinese production the level of details will be different in the future. In which direction they will develop finally we will probably see on the next Toy fair. It is for sure that the level of detail can only get onto a higher level. I am really looking forward to future models; up to now highly detailed models were not really a strength of Joal, although they made really nice replicas.