By introducing the all new LTM 11200-9.1 at bauma 2007 Liebherr one more time is expanded into the super class of telescopic cranes and has relegated the legendary Gottwald AMK 1000 from the throne of the worlds largest cranes to position 2. 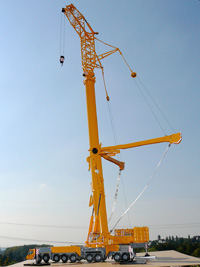 While the 1200 t capacity crane already proofs its advantages very successfully in reality for companies as Mammoet, McNally, van Marwijk or Eisele, collectors can now look forward to a fantastic and huge die-cast model of this impressive Liebherr LTM 11200-9.1. Interestingly it is the very first Liebherr AT crane coming from NZG. And that was why I was even more curious how NZG copied this crane with its functionality since this is also the biggest model for NZG ever. Luckily the Nurnberg based model specialists presented one more time a highly detailed crane model with an absolutely excellent level of functionality exceeding my expectations. For this review story I got a pre production sample of which I took the pictures and which was really fascinating. 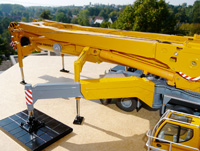 While assembling the crane I simply can show also the self-assembly system very well. Due to the heavy weight of more than 100 metric tons with all 7 boom sections it has to be transported separately. I started with supporting the boom on its four outriggers. Afterwards, as in reality, I move the crane carrier underneath the boom until I can fix both by using a „real“ bolt. This bolt is not a simple wire nail, but a real bolt painted in the Liebherr yellow. Screws connect both hydraulic hoist cylinders. 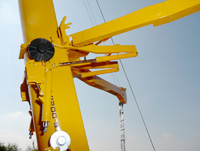 During this very first assembly I had chosen the maximum combination with all 7 boom sections, adjustable lattice jib and Y-guying system. The well-known system of small screws and nuts – as on NZG’s Grove GMK 7550 or Liebherr HS 855 – is used to assemble the jib and the guying system. The last one is equipped with an authentic looking pendant line in the back.

While extending the boom I move both guying winches by using a special key. In order to provide stability once the boom is fully extended a special locking mechanism allows tensioning the complete boom. Both winches are spring-loaded and can be operated by giving little pressure on it.

That is how I proceed with all boom sections – with exception of the last one. Because of my ceiling the maximum height of the crane is limited.... Fully extended the maximum boom length of the model is 2,25 m! This length comes to 1,25 m when rigged only with the T3 boom system.

After reviewing this great crane model in detail I really can say that this flagship of NZG’s model range is really an impressive and fantastic addition to the crane collection at home. And NZG did a great job on it! It features the complete functionality as in reality, which I highly appreciate. The level of details is typically high, as we would expect from NZG and it even has some totally new features. So, let’s wait on the hopefully coming company liveries. The forthcoming Mammoet version I have already ordered!