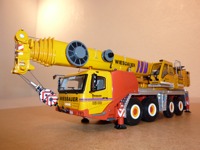 TWH presents us two new All-terrain cranes: the all-new Grove GMK 5095 und GMK 4100. Both are extremely detailed and do not leave nothing to be desired.

Here I will review these two, while the GMK 4100 comes in Wiesbauer livery. Beside of the standard Grove colors, TWH offer the cranes also in some other liveries as for example MSG or Bäumer.

GMK is an abbreviation for the German words of “Grove mobile crane”; originally it came up when the former Krupp crane line was re-named from “GMT” in “KMK – Krupp mobile crane”. Grove took over this crane business and so this crane line still continues improved under the Grove GMK name.

Details at its best

Both models run on a four and a five axle chassis, which are highly detailed. All axles can be steered and additionally feature a single wheel spring activation. Just give a slight press onto the cab and you can see this mechanism! It is a unique feature of Grove cranes that every single wheel is spring activated. Grove calls this “Megatrak”; this system was first introduced on the former Krupp AT crane range. A full set of hydraulic hoses is completing both undercarriages. So I really appreciate it that this special feature is also copied on these models.

The typical superior level of details we know from TWH continues also on the superstructure. The cab can be tilted backwards and comes equipped with wipers, lightings and even an identification plate. The counterweight on both GMK’s looks like one unit and cannot been simply disassembled. However, it is not one single casting but consists of different parts on both cranes. 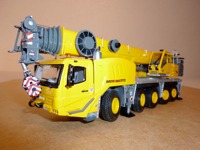 Let’s have now a look on the boom systems. Each boom system has one main element and 6 sections, which can be fully extended to a length of 1.1 m and with jib extension the models have a height of 1.4 m! In reality this would be a height of approx. 80 m. The jib extension is also very interesting and features TWH’s level of high details as well. A small hydraulic cylinder adjusts the angle of it. In reality the crane then could reach far over a building’s corner.

One typical feature of TWH models is the great decaling with all kind of different warning signs. You can find nearly every sign as on the real crane! Even positioning marks on the outriggers are clearly readable. An additional hazard sign would warn of danger caused by the boom cylinder. Really fantastic!

Surprisingly a special plate gives hints of how to hoist loads. It is hard to read due to the small size but I really like this detail! This kind of details currently only TWH provides.

All in all TWH again presented highly detailed crane models with an amazing level of small items providing a much more realistic and authentic impression of the real cranes.
Really a great addition to the crane collection at home!