High in the sky on 8 axles:
The all-new Liebherr LG 1750 from Conrad 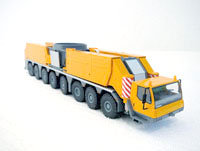 Really impressive are the dimensions of the 8-axle carrier: 37 cm long und 6 cm width. All axles can be steered and are turning easily; the tires feature an authentic pattern. An anti-slipping surface in silver color is covering the under carriage. Easy access is provided by small steps on the model’s back which are equipped also with hand-railings. Exhaust muffler and air filter are well-copied and the large engine cooler behind the operators cab catches our eyes.
Four massive outriggers support the LG 1750 model; which look like a star. This system is usually used on larger lattice boom cranes and the advantage is that all forces are only guided in the small portion of the under carriage frame underneath the slewing ring. This is totally different to the H-outrigger system on smaller cranes; here forces are guided through the whole under carriage. All 4 outrigger frames are made of zinc; happily no plastic is used. The basic length is 14 cm and can be extended until 20 cm.
But there is one feature I was absolutely fascinated from: the outriggers itself. It is really flamboyant that we can see no screw thread. Since the outrigger beam is made as a hollow tube, the thread can be found within it and therefore not visible. This hollow tube is connected to the outrigger pad. The responsible screw is located within the outrigger frame. This connection is really stable, because Conrad had choosen a really clever solution. Within the small hollow tube we can see a small space where a small screw nut is placed. This provides excellent stability to the model. Really a great solution!

While the carrier is now supported well, I continue by assembling the upper carriage. This is when the quick connection comes on stage, which is really a great innovation in model building and not existing on other models.

The boom system is the same as on the LR 1750 model and for my very first assembly I decided to show the maximum SDWB system. This consists of main boom, derrick mast, suspended ballast and luffing jib. Fortunately Conrad changed the boom pendants on the LG 1750 to the more authentic system used for the first time on the tower crane 630 EC-H 40.
For the very first assembly I recommend to wind all ropes on the winches before the boom system is assembled; this eases the whole process. The rear winch is responsible for the A-frame. While reeving I only fix the rope to one side of the winch and reeve it from one side to the other. When I fix the second end afterwards it is easier to winch the rope then.
I then continue with the derrick mast. The winch located in the first section is responsible for adjusting the main boom. By the way, all winches sitting inside the mast elements are fixed with small plastic bolts. These can be easily loosened and therefore the winch would also be a load for other trailer models. All three mast elements are connected by small plastic bolts and I connect the pendants with the A-frame afterwards. Finally I reeve the rope for the main boom.
Because of the length and the weight of the boom system I also recommend to assemble the boom laying on the ground as it is done in real life. The winches inside the main boom element can be moved into it for reducing the transport height. Also a great detail! Two small metal keys can easily move all winches.
With two intermediate elements the main boom has a total length of 1 m or 49 m on the real machine. Six pendants connect the main boom with the sheave block and I additionally place the sheaves for the heavy main boom on its upper part. If you would then reeve the main hook you can show your LG 1750 model in the SDB version.
I had continued with assembling the luffing jib and luffing masts. Each part is fixed by both the bigger and smaller plastic bolts. Luffing jib and the lower luffing masts are connected with the main boom. After I assembled all pendants here I started with reeving the cable for luffing. But before lifting the boom we need to look on the ballast system.

In contrast to the LR 1750 the new LG 1750 gets additional counterweight by the suspended ballast platform. This ballast is not running on wheels – as on the LR 1750 model - but it is floating. And this is also the reason why not always the maximum ballast is placed on it.
In reality first the main hook is connected to the load and then a support crane is placing the required counterweight onto the ballast pallet. The whole system is balanced and the crane can lift its load. Generally this counterweight system with pallet is foreseen for mobile lattice boom cranes; counterweight carriers are used only on crawler cranes. The maximum suspended ballast in reality is 400 t.
On our model the suspended ballast consists of the pallet, where counterweight plates can be placed on three positions. Between these a vertical A-frame takes the connection to the pendants of the derrick mast and the frame to the upper carriage. While being transported these two A-frames can be placed sideways to reduce transport height.

On both frames small ladders would give access to the working platform around the pendants. In reality from here the pendants would be connected to the counterweight pallet. The latter is connected to an extendible frame, which is fixed by two bolts between the super structure counterweight. By increasing the back radius, the crane can also increase the back load moment to achieve higher lifting capacities.

Before I’ll start erecting the massive boom system, I’ll check all ropes and bolts. Then I start moving the winch while the whole 2,5 m boom is still sitting on the ground. The derrick mast is raising while I give also rope for the main boom and in its final position I can connect the back pendants to the suspended ballast. And then I move again the main boom winch and slowly also the main boom is raising. Incidentally, when raising the main boom, the biggest forces came up for lattice boom cranes.
Here the luffing jib is running on the ground to unload the whole system and the main boom is not stressed with the whole weight. Therefore I need to turn also the luffing jib winch. When luffing jib and main boom are roughly in a 90° angle, I can lift both. In reality this would be done only for one meter since at this position the hook block would be reeved. On the model it is more comfortable to proceed with this step when the boom is fully erected.

Finally, let’s have a look on the hook blocks. The LG 1750 model is delivered with two different hook blocks: one for a maximum load of 600 t and for 300 t. Both hooks are modular, which means that one 600 t hook is the same as two 300 t hook blocks. The 300 t block is mainly used while working with luffing jib and the 600 t hook would be used in heavy-duty applications on the main boom only.
On both hook blocks the final hook can slew; the lifting eye in its middle can be also used for lifting heavy loads. All sheaves rotate easily and their location simplifies reeving it.
The main hook has a weight of 16 t in reality; both parts are connected with a small frame providing parallel guiding. This is necessary when it is reeved by the two main winches in reality. Another great detail are the removable weights on both sides. In reality these are necessary when the hook is fully reeved, they ensure lowering the hook.
By the way, the LG 1750 model is delivered with different versions of plastic bolts. Among these is one type, which is not needed for the LG 1750. But if you own a 630 EC-H 40 model you can use these as compensatory ones for the tower assembly.
Finally I can state that the LG 1750 is really a great model. The level of details, functionality and operation are copied with impressive accuracy to the original crane. A really impressive model!

Finally I can state that the LG 1750 is really a great model. The level of details, functionality and operation are copied with impressive accuracy to the original crane. A really impressive model!