Telescopic cranes on crawlers became very popular within the last years. This is thanks to their high mobility without outriggers. They can travel – also with loads - in every part of a construction site. And this is really an advantage compared to an all-terrain crane.

And so we didn’t had to wait a long time for the first scale models, in 1:50 scale: the 100 t Liebherr LTR from Conrad and the 80 t crane Sennebogen 683 made by Brami. Although the last one sometimes is listed as a model made by the Italian manufacturer Ros, the model itself and its package is named with Brami. 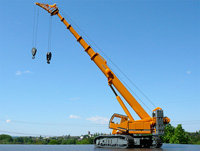 Already when I unpacked the Sennebogen 683 I noticed the first differences. The crane is nearly knotted with a couple of wires to the package and I had to free it form its „handcuffs“. Therefore the crane model is immediately ready to work. Unfortunately I didn’t need to do any assembling procedures.

The LTR 1100 comes in a stable package made of polystyrene. Once unpacked, some elements are waiting on their assembly by the collector. I started by mounting the four jack-up cylinders for the self-assembling system by small plastic bolts. In between the undercarriage counterweight is being placed on the upper plastic bolts. On the Sennebogen the counterweight is already fixed to the under carriage and can’t be disassembled.

The upper carriage counterweight of the LTR 1100 consists of two base plates and 2 blocks for each side. By using two plastic bolts I connect the base plates to the back frame on the upper carriage. In reality this would be done hydraulically after the two cylinders lifted the counterweight. These lift cylinders we can find also on the back frame; small chains I attach to the cylinders. The last step I have to make is fixing the erection jib with the two longer bolts. Then I assemble the second winch and reeve both load hooks. And the LTR 1100 is now also ready to work! 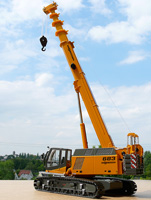 The counterweight of the 683 is unfortunately fixed to the upper carriage and can’t be disassembled. It is also one complete casting. The lifting cylinders are copied well by Brami including small chains. Unfortunately the model doesn’t have an erection jib at all. 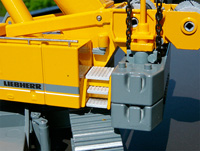 Both under carriages can be extended and a small cylinder for adjusting the trace can be seen from underneath. Therefore the crane models have a great stability and also a small trace for transportation on a low-bed trailer model.

The replicas cabs are really a highlight on the 683 as well as on the LTR 1100. Brami and Conrad provided really great copies with a good level of details. The Sennebogen model comes equipped with mirrors and windscreen whipers while the LTR 1100 has detailed railings. Additionally great decals with warning signs can be found on the 683’s upper carriage. And for avoiding an aching neck while working in large heights both cabs can be tilted backwards.

Let’s have now a look on the booms. The LTR 1100 has got 5 telescope sections while the 683 comes equipped with only 4. Therefore the total boom length is 103 cm on the LTR and 82 cm on the 683, measured to the boom head. Unfortunately there is one downer on the Sennebogen, all four boom sections are made of plastic and this doesn’t really have to be this way! 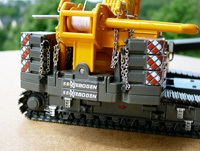 All cranes have two winches, while the LTR 1100’s back winch can be mounted by four plastic bolts. If I would display the LTR without jib I simply can disassemble this winch. The first winch on the Sennebogen is equipped with rope, but doesn’t have a function and can’t be disconnected. Additionally the main winch was really easy to go and couldn’t hold a single or two line rope. The LTR winches are running not so easy and can lift smaller loads. Unfortunately Brami used white rope on the Sennebogen model, which really destroys the optical impression.

This feature is really annoying but can be easily exchanged. Just one hint from my side: MSW Modelle offers non-twisting black rope. This one is similar to the rope used on the LTR model. Here the optical impression is really great. Nearly all my crane models I changed to this rope version; I really can recommend it.

Finally I can state that both models are highly detailed. Differences can be found in some smaller details but especially in functionality; the LTR here is the leader and that is also why it is my personal favorite. The Sennebogen 683 model is a good start for all of those collectors who don’t want to assemble many things. In my displays both of them look great!